By Little Miracles InternationalOctober 28, 2019No Comments 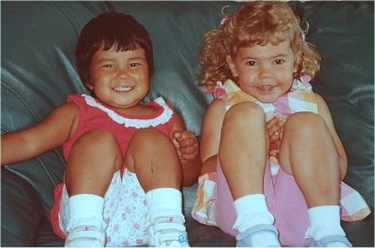 My husband and I had a two year old biological daughter when we decided to start the adoption process in the hopes of adopting another toddler. We searched through many internet photo-listings using the computers of friends, family members and the library because at the time we did not own one. I was sitting in my sister’s house using her computer when I happened upon the Little Miracles International site. 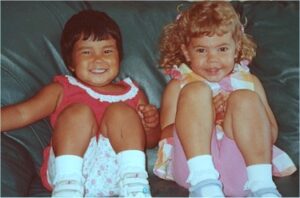 As I scrolled through the many pictures, one cuter than the other, I noticed the picture of a two year old girl with the most beautiful and soulful eyes I had ever seen. I knew instantly that she was MY daughter. The caption next to her picture stated that she was Hepatits B positive. I happen to be a nurse and was not bothered by this in the least. I hurried home to my husband who also confirmed that this was indeed our daughter.

It was five minutes past five Texas time when I called Lori Scott. She picked up the phone with a tentative hello, which made me think that I had the wrong number. She explained that she was just walking out of the office to attend to something else but turned back to get the phone. I told her about the angel whom my husband and I just knew was our daughter. She told me that another family had hoped to adopt this precious girl but changed their minds when they learned of her Hepatitis diagnosis. This had left Lori with a heavy heart. Not many families show interest in children with a Hepatitis diagnosis. For us the adoption journey had just begun.

A few days later I was giving my daughter a bath and dropped the cordless phone into the tub. It went dead immediately. I put it aside and continued with the bath. Within a few minutes the phone rang! It was Lori Scott. I told her, ” You are not going to believe this but I am talking to you on a phone that is completely dead!” We hung up and I called her back from another phone. This was the second sign that our daughter was definitely meant to be ours.

We started on our paperwork immediately. Things went very smoothly and very quickly from then on, although at the time it seemed to be taking an eternity. We received three videotapes of our daughter during the wait. She was growing and changing right before our eyes. We were thankful not to have to miss seeing her growth entirely.

In four months we heard from Lori that our paperwork was approved in Kazakhstan and we would be traveling sometime in the next six to eight weeks to bring our daughter home. Then I suffered an emotional setback. The magnitude of what we were about to do finally hit me and I felt suddenly paralyzed. I knew we would be leaving our then three year old biological daughter behind for several weeks with her grandparents. While I knew she would be safe and fine I felt that I could not bear the separation. I also felt tremendous guilt for abandoning her for so long and worried that I would traumatize her for life. I called Lori and told her FORGET THE WHOL:E THING…..I’M NOT GOING!!!! Luckily for me, both Lori and my husband are very level headed and convinced me that I was just buckling under the pressure. By that evening I was once again on track.

Finally, on June 27, 2000, six months after we had begun the journey, we were on a plane to Kazakhstan. We spent a day in Almaty before flying on to Semey to meet her for the very first time. We were elated and terrified at the same time. ( I remember thinking that this feeling was the same as when I was in labor and the nurse told us our baby would be arriving any minute.) We held our breath and walked into her room. There were nine children , all playing and running around. Our daughter was standing behind us, oblivious to the significance of this moment. She looked up at us with those magnificent eyes and smiled. My husband said, “She is even more gorgeous in real life.” I just cried and could not speak. She was so tiny and so amazing. She was dressed in a floral ruffled dress and the tiniest pair of shoes. I held her hand and told her I was her Mama and I was sorry that it took so long for us to come for her. She just took the lollipop we had given her and walked away to play with her friends. We could not stop looking at her. I thanked God over and over again in my head. I finally understood why, when I had prayed for another child all those months, it seemed that God was not listening. We were being prepared to accept this child, the one who was already born and waiting for us.

During the following eight days we were faced with the challenge of helping our daughter leave the only home she had ever known. She had no way to understand the concept of a family and a wondeful new life thousands of miles away. She did not begin bonding with us until four days after we arrived. Those first four days were filled with her tears and our uncertainty about whether or not we were doing the right thing tearing her away from the caretakers whom she obviously loved so much. We were fortunate to have the support of our coordinators, the orphanage director and the two other wonderful families we traveled with. By adoption day she was falling in love with us, as we had already fallen in love with her.

The court hearing was very quick and painless. It was truly a joyous day for all of the families traveling together. We departed for Almaty two days later and began the wait for our children’s passports. By this time we had been away from our other daughter for two weeks. My husband and I decided that he would return home without me . I spent the following two weeks in Almaty with the other two families and our wonderful coordinators trying to make the time pass more quickly. It was difficult for the children to make so many transitions from one place to another. But they proved to be amazingly resilient.

It truly was a very trying time, and all of our nerves were raw. While the apartments we stayed in were clean and comfortable, it was difficult to get accustomed to the completely different culture, the unbearable summer heat, and our children’s emerging temper tantrums and anxiety. We did the only thing we could…we supported each other through it and loved our children through it. The toddlers seemed to fare the same as the babies, with no added difficulties. Finally, on July 20,2000 we flew to Moscow and got our children’s travel visas. We even managed to do some breathtaking sightseeing in Moscow. On July 22, 2000 I arrived home with my new daughter.

Fast forward five months: It is as if she has been with us since the day she was born, although I still sometimes cry for all of the missing years and memories. What did she look like when she was a baby? Our earliest picture is of her at two years old. What did she smell like and feel like when she was first born? She is simply scrumptious now. She speaks English very well and even rejects when I try to speak to her in her native Kazak. I think it confuses her.

The adjustment period was very short and there were absolutely no attachment issues. She tells us, ” I love you so much” and “Poppy is my best friend”. She and her sister are best buddies, and also argue like true siblings! She surprises us daily with her increasing knowledge and skills. We have to monitor what she eats because she will still stuff herself until she is sick if she gets the opportunity… And this is our only issue! We got the wonderful news that she DOES NOT have any form of Hepatits after all, yet another miracle for her. She has grown two inches and three shoe sizes in five months. Her Kazak name means sunrise, and she is truly this for us. She is just as wonderful and just as exasperating as any other child. She is OUR child. She turned three just two months after we got home on our wedding anniversary.

I had a dream recently that I was holding a beautiful baby in my arms and asking whose child she was. My husband kept saying, ” You know who the mother is. Remember, I told you the other day.” I just kept gazing into her eyes wondering who she was. I awoke the next morning with the most profound revelation. God had just showed me what my daughter looked like when she was born. And so our family life goes on, so different from how it was before, but feeling exactly the same.