The Process is About Faith, The Delozier Family Story

By Little Miracles InternationalOctober 28, 2019No Comments 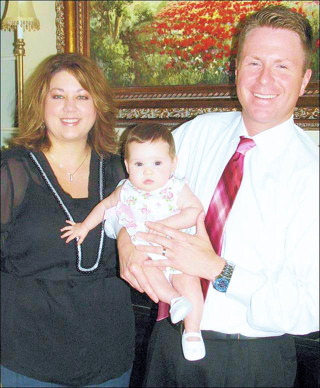 Naming their new daughter, Alexandra Faith DeLozier, came easy for Darren and Robin DeLozier. Alexandra was her name at the orphanage, and “Faith sums up this whole process,” said Robin. With a strong faith and determination the Adair, Okla., couple flew half way across the world to adopt their first child. The DeLoziers adopted Alexandra from Semitalatinsk, also known as Semey, Kazakhstan, in May and have been in love with her ever since. 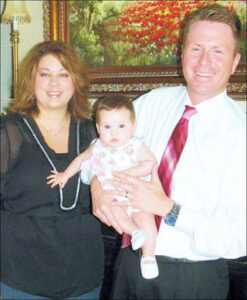 The Delosier Family Home in Oklahoma

The couple adopted Alexandra just in time to celebrate being a mom and dad. Robin spent Mother’s Day in Kazakhstan with Alexandra on May 13 and Darren celebrated his first Father’s Day with his little girl Sunday.

“She’s the best gift we could have – a new baby,” Robin said. “She’s doing really well. She teething right now. She’s not sleeping through the night but that’s OK. She’s had a lot of changes in her life these last few weeks.”

It’s been not only a big change for little Alexandra, but for her new parents. The DeLoziers, who have been married nearly 15 years, decided two years ago they wanted to adopt a child.

“Originally we were going to adopt from Russia. The program went through a lot of turmoil so we switched to Kazakhstan in March 2006,” said Robin, who is a family and consumer science teacher at Adair High School. The couple used the Little Miracles International adoption agency based in Amarillo, Texas. “We started doing the millions of pieces of paperwork that were required. We did the home study and there were just so many forms and things we had to get done,” Robin said.

The couple had to have a Federal Bureau of Investigation background check as well as local background checks. They had to be fingerprinted and go through medical exams.“We had to go through USCIS (Bureau of U.S. Citizenship and Immigration Services) and get several forms done through them. That took a long time. That is what really slowed down our process so much,” Robin said.

The couple had to stay on top of all their paperwork and make sure that nothing expired. “You can’t let dates expire on anything you get done. Some things we had to get redone once or twice before we were actually able to travel,” Robin said.

They also had to make trips to Oklahoma City to the Secretary of State to deliver documents. “It took six months to finish all that. Then from that point we were waiting for the referral of our child,” Robin said.

Once the DeLoziers received an invitation to visit Kazakhstan they made arrangements for their trip. The couple were told they would meet three to five children when they arrived at the orphanage and would have to choose the child they wanted from the preselected group. Kazakhstan, which is located in central Asia, northwest of China, has specific rules about the adoption process.

“They tell you what region you have been approved to travel to,” Robin said. “When you get there then you go to the orphanages or baby houses. They show you children that meet the requests you have such as gender and age. Then you chose from those children which one you wanted to adopt.”

The DeLoziers took a 26-hour flight, leaving the United States on April 1. They made it to the orphanage and met three baby girls, one of whom was destined to become their daughter. “April 4th is the day we actually met Alexandra,” Robin said. Once they had chosen Alexandra, the DeLoziers had to begin a bonding process. “Kazakhstan’s process is you have to spend 15 days of bonding with your infant. We’d go twice a day to the orphanage and take her to a play room – two hours at a time in the morning and in the afternoon. That’s really a good thing, because you get to know her and you feel a lot more confident and you’re not just given the baby and told ‘here’s your child,’” Robin said.

During the 15 days, Darren and Robin traveled only with escorts. “Everywhere we went we had a translator and a driver. They took us everywhere we needed to go and took good care of us. We spent a lot of hours alone and in our apartment. We’d be out about six to eight hours a day. We’re talking a lot of hours in the apartment, with Russian TV of course. Our Internet was our lifeline, to keep our sanity,” Robin said.

Robin used a blog on the Internet to keep in touch with family and friends back in Adair. She tried to write on the blog every day to let everyone know how they were progressing. She also received words of encouragement from those awaiting their return.

One of the good things about their stay was the people. “The people were really nice. The orphanage was always spotless. The outside was dingy and sad but you go inside and that is where they spent their money,” Darren said. “It’s old but it’s very clean.”

Robin said they felt good about the orphanage. “They do the best they can with what they have.”

Once the 15-day bonding period was over, the DeLoziers received a court date. Darren had to prepare a speech and worked with a translator to perfect it before seeing the judge. “It was us, a translator, our adoption coordinator for that region, judge, prosecutor and director of education,” Darren said. “You go in there … you say a sentence and they translate it in Russian.”

The DeLoziers were very nervous about going to court but felt well prepared by the agency. “You’ve been doing all of this and this is the moment you’ve been waiting for … it went so smoothly. After it was over we thought that wasn’t bad at all,” Robin said. “We had court on May 2. We took her for her passport photo that afternoon and we got her that morning of May 3,” Darren said.

Once they had their daughter, who was 9 months old, they left Semey and headed to Almaty, Kazakhstan, their last stop before heading home. The stay in Almaty was necessary to finish up last-minute paperwork. “We flew to Almaty on the (May) fourth and got settled into our apartment there. Then Darren flew home on the sixth,” Robin said. “It was really hard when he left. You have to stay with a baby you’ve only had for two days, then you’re left alone in an apartment with her. It was hard. She was adjusting to us and not sleeping real well. She wasn’t feeling well. She had been ill. It was pretty overwhelming at the time. But when my sister came it was a huge relief just to have someone else to help out and to talk to about what she’s doing and if I’m doing the right thing.”

Robin’s sister, Rhonda Walenta, of Tucson, Ariz., flew to Almaty on May 8, and stayed the remainder of the time with Robin and her new niece, Alexandra. Finally, 48 days after their journey to Kazakhstan began, Robin, Alexandra and Rhonda boarded a plane to make the 26-hour flight home.

Despite taking an infant on such a long trip, Robin said everything went well. “We were really blessed,” she said. Now that they’re home, Alexandra is getting to know her new family. Alexandra’s new grandparents were excited to see her for the first time.

Robin admits things have changed at their house since Alexandra arrived. “We don’t get very much sleep anymore. We don’t go out to dinner all the time,” Robin said. “We had been just a couple for so many years that we would just go to Tulsa whenever. Things have changed in that area now. We’re having a lot of fun. We laugh at ourselves at nine o’clock at night when we’re like ‘I want to go to bed.’ It’s great. She’s so much fun.”

Alexandra’s new life is dramatically different from the orphanage. “She had never been outside so … the sunlight kind of bothers her,” Robin said. “She had never been in a car seat or stroller. It’s just like starting with a newborn almost but she’s a lot stronger so she really fights sometimes.”

Developmentally, Alexandra is doing well. She is crawling and sitting up. Darren said when they first started spending time with her she didn’t have a lot of lower body strength but even that is changing.

“I had concerns about her developmentally. She was really tiny,” Robin said. “I had a lot of concerns but she’s a good one.”